So here we are, two months after our first case study began.

To prove our salt as one of North Carolina’s top SEOs by ranking number 1 for “SEO Expert” in all major cities across the state by April 1st.

We created 9 new city pages and an extra one for the state on the 23rd of September.  Throw in the first case study post, and we have 11 2-month old pages to rank for our target keyword sets.

Let’s go ahead and hop right into our results so far.

Expanding across the state hasn’t turned out to be that difficult.

Greensboro SEO Pro has become a staple in the search results in all but North Carolina’s two largest cities.

As expected, Charlotte and Raleigh are putting up a fight.  But the other cities look like near-certain victories already.

Here’s the current results for our target searches. Notes: Surprisingly, this search term currently displays a “Maps Pack” result.  For this search, it all but guarantees that searchers will choose either Greensboro SEO Pro or Little Genius.   Our First Case Study Video also ranks in the middle of the first page, anywhere from 4 to 7 depending on when the search is performed. 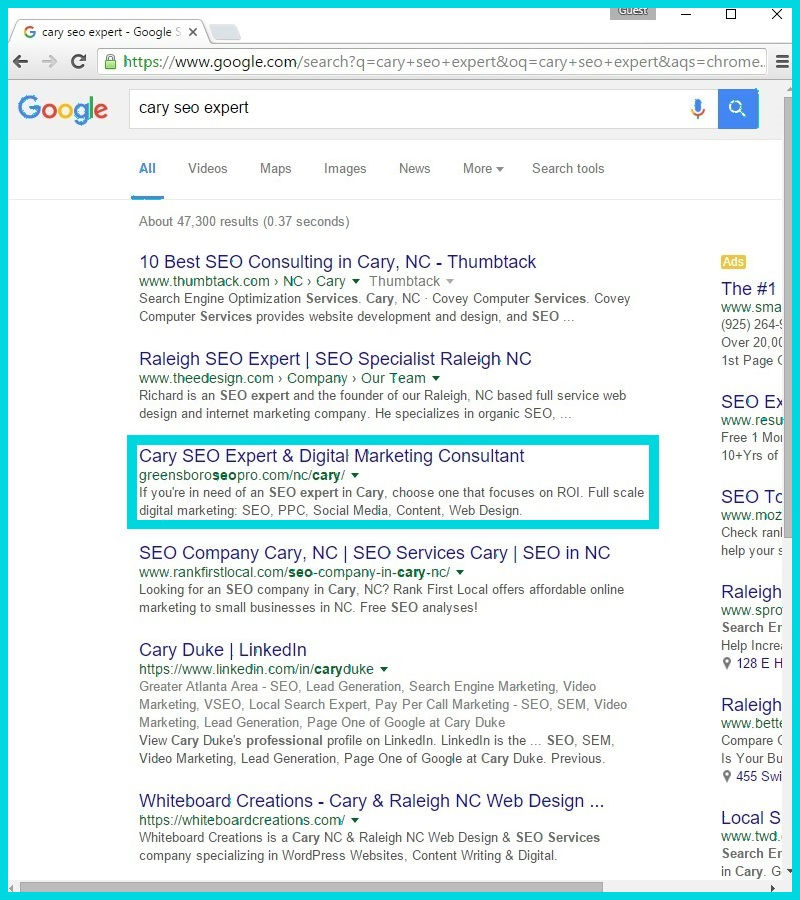 Notes: Any given day you perform this search, Greensboro SEO Pro may be anywhere from the second to fourth spots.  Over the next two months, we will be looking to stabilize this one at number 1. Notes: The Queen city ain’t no joke.  There is plenty of competition in Charlotte, keeping us completed off the first page.  In fact, we’ve barely made it onto the second!  It will be an exciting challenge to force our way to the first page.  If we’ve made it there by the time of the next update, we should be on track to take the fight for the top spot by our goal. Notes:  The Durham SERPs aren’t that volatile for SEO keywords.  We’ve steadily been climbing.  Would likely make it to number 1 or 2 by the end of the case study without doing anything else to the site.  But hey, that’s not going to happen.  Instead, we’re going to try to put this one to number 1 within the next two months. Notes: Fayetteville is on the verge of being taken over.  Most days, GSP ranks second, but recently, we’ve been taking the top spot for periods at a time. Notes:  On any given day, Greensboro SEO Pro might find itself anywhere from 5 to 9 in Greenville.  There are some entrenched companies locally, and it will probably take awhile to fully relieve them of their rankings.  But expect this range to move up the scale over time as we approach a consistent number 1. Notes:  Greensboro SEO Pro has owned the number one spot in high point for nearly two months.  Almost as soon as the page was created, we jumped to number one.  Greensboro and High Point are in the same county, so that makes sense. Notes:  Some days we taste as high as number seven, but more often we are kept just off the first page.  Raleigh SEOs are defending their turf admirably, but it’s only a matter of time before Greensboro SEO Pro sticks on the first page, in the top 5, top 3, first spot. Notes:  In Wilmington, we’re most often seen at the third spot.  But some days, we taste second, others we taste fifth.  We’ll be looking to stabilize this search at number one over the next two months.

Notes:  Our Winston-Salem competition has been surprisingly stiff.  Unlike the search for “high point seo expert”, GSP has been stopped at the fourth spot for a few weeks.  Our next push should see us work our way into the first two spots and by the time of the next update, yet another number 1.

So How Are Things Back in Greensboro?

It’s pretty obvious that we’re well on our way to the goals we set forth 2 months ago when we announced this case study.

But in the meantime, we have continued to increase our hold on the SEO results in Greensboro.

Indeed, we’ve stepped things up a notch on the homefront.

The first thing this case study has taught us is that North Carolina has plenty of companies in need of search engine optimization.

As we started to climb these rankings, the flood of new leads really pushed us past our limits.  The sudden surge forced us to increase our efficiency in several key areas.  In fact, the last two months have been so busy that little time has been spent furthering our SEO profile.

Indeed, if we had succeeded in putting everything we had planned into place over the last 60 days, we’d be even closer to our ultimate goals.  Instead, we had to take a pause to handle all of the additional lead volume we garnered.  We can’t lie, that’s a great problem to have.

Now that we’ve been able to streamline our operations and improve our ability to handle volume increases, we’re ready to go back on the attack.

We’re sure that the next two months will yield an even higher increase in leads generated as we stake our claim in the state’s largest markets. Despite the positive future outlook, we know that Greensboro SEO Pro still has its work cut out for it.

With this case study we have been able to identify the best search engine optimization companies across the state.  And in measuring ourselves against them, we now know our most worthy competitors.

While there are a few other pockets of resistance, Charlotte, Greensboro, and Raleigh stand head and shoulders above the rest of NC.  Greensboro SEO is already largely under our control.  It is time to start targeting the other two big fish in our local digital marketing pond.

We are going to continue with the bi-monthly updates for the remainder of the case study.  Stay tuned to see our progress!